Javed Miandad started it all by criticising Shahid Afridi and accusing him of wanting the farewell game only for money .

Pakistan cricket and match-fixing go back a long way. Every time it appears that the dark days of fixing saga are behind, the ghosts return to haunt Pakistan cricket. This time, it has triggered a war of sorts between two popular players Javed Miandad and Shahid Afridi. The former started it all by criticising Afridi and accusing him of wanting the farewell game only for money . On the other hand, Afridi, while responding to the allegation, claimed that it is Miandad who has always been after money. Money has always been an issue with Miandad. That is the difference between him and Imran Khan, said Afridi. And then Miandad came out and labelled Afridi as a match-fixer , a serious blame that could potentially land him in trouble.

According to an ANI report, Afridi hit back over Miandad s recent comments during the book launch ceremony of sports journalist Saleem Khaliq. He said that money has always been an issue for Miandad rather than him. He went on to add that it doesn t suit the legendary cricketer like Miandad to pass such kind of irresponsible comments. I will meet PCB executive committee s chairman Najam Sethi and talk to him about what the board wants to do regarding the farewell game, Afridi was earlier quoted as saying by the Dawn.

This is the video where Afridi can be seen taking a swipe at Miandad:

Responding to the controversial remark passed by Afridi, Miandad suggested that it was Afridi, and not him, who was behind money by claiming the Boom Bomm star had fixed matches and sold the Pakistan team. The whole team had fixed matches. If I had any money related issues, I wouldn t have left the team, but I did, the legendary batsman added.

After hitting back to Miandad, Afridi further tweeted over his own comments towards Miandad by saying that he is a legendary cricketer but he used very harsh words on him for long time.

Javed Miandad is legend of cricket but he used very harsh words on TV for long time. He made personal attack on me for no reason1/2

I tolerated for long time but every person has a limit, sad that Javed Miandad was making personal attacks for long time2/2

I regret what I said to a senior but of course I had to eventually react to his behaviour.

The latest development in the matter hints at trouble for Miandad, as Afridi is reportedly planning to take action against him. According to a tweet by senior Pakistan journalist Saj Sadiq, Afridi may drag Miandad to court.

Afridi, who quit the captaincy after the World T20 debacle in India, is yet to announce his retirement from the game’s shortest format. He has thus far made 98 T20I appearances and is the leading wicket taker in T20Is of the game with 97 scalps and has scored 1,405 runs at an average of 18. 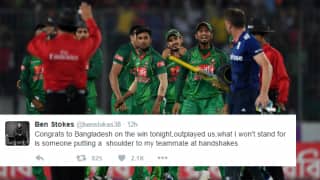