Former captain Shahid Afridi feels under current situation no international team will tour Pakistan and advised the PCB to stop trying to convince weak teams such as Bangladesh to play in their country. 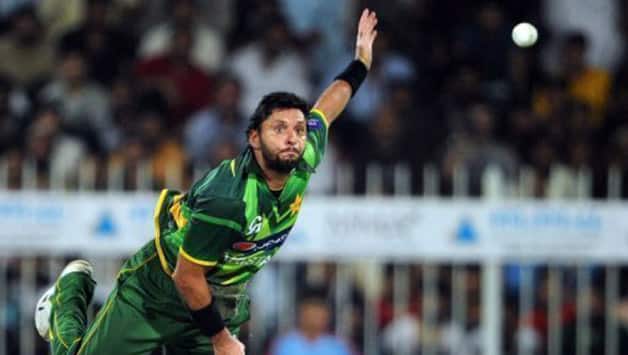 Former captain Shahid Afridi feels under current situation no international team will tour Pakistan and advised the PCB to stop trying to convince weak teams such as Bangladesh to play in their country.

Afridi said on Geo News TV that while he understood the honest efforts made by the board to somehow revive international cricket in Pakistan but felt running after teams like Bangladesh would serve no purpose.

“I don’t think teams will tour Pakistan in present circumstances. It is better if the board waits for the situation to improve in our country. When things improve all the teams will want to play in Pakistan it is a matter of time,” Afridi said.

The flamboyant all-rounder, who rejected a lucrative offer of around Rs 40 million to play in the Bangladesh Premier League, said he was not in favour of the board trying to convince teams like Bangladesh or other weaker sides to come to Pakistan.

“It is unfortunate the way Bangladesh reacted. But it is serving us no purpose. It only creates negativity. It is better if we just focus on our domestic cricket and the Super League is a step in the right direction,” he said.

He pointed out that Pakistan was one of the leading teams of the world and had shown that it can do well anywhere in the world, despite not playing at home since 2009.

“Our cricket is doing well and our team is performing well. So we shouldn’t be too worried about when teams will come to Pakistan it will happen eventually we just have wait patiently,” he said. .

Afridi said he would be playing against Afghanistan for the Pakistan A side next month.

“I might also play a four day match to get more practice to get back into proper form,” he said.

Indications are that the board will appoint Afridi to lead the Pakistan A side against Afghanistan with senior wicketkeeper, Kamran Akmal also getting a chance to play after being sidelined for the Test series in South Africa.

Afridi also said that the Test series that starts in South Africa would be a real test for the players.

“But I think it will be an engrossing and tough series because our test team is well balanced and capable of surprising anyone anywhere. But we have to play to our best against the world’s number one team,” he said.

Pakistan Super League: South Africa and Australia will not allow their players to take part in the tournament