Pakistan slumped to ninth, their lowest ever ranking, in the ICC one-day international table.

Karachi: Pakistan swashbuckling all-rounder Shahid Afridi has stressed that the country’s domestic cricket needs to be overhauled and stated that the absence of international cricket at home shouldn’t be used as an ‘excuse’ for the team’s shortcomings.

Pakistan slumped to ninth, their lowest ever ranking, in the ICC one-day international table following an embarrassing ODI whitewash against Bangladesh on their April-May tour. PCB accept confession statement from Slaman Butt

The team also faces the prospect of missing out on playing 2017 Champions Trophy in England for the first time in its cricketing history as only the top eight teams will compete. England have edge over Australia in The Ashes 2015 as they play at home: Shahid Afridi

Afridi, the T20 captain, suggested that they need a strong domestic structure, which should also provide facilities of international standards. Saeed Ajmal ignored: Is this the beginning of the end for Pakistan’s ace spinner? 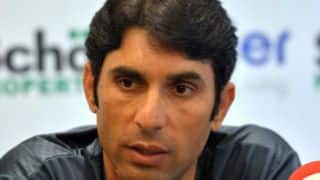