Shai Hope is only the second West Indies after Chris Gayle to score century in his 100th ODI.

Port of Spain, (Trinidad): West Indies vice-captain Shai Hope achieved a unique feat in the second ODI against India. Hope scored a brilliant century in the match and became only the 10th batter in the history of ODI cricket to score a century in his 100th game. Hope’s century and captain Nicholas Pooran’s dazzling 74 helped West Indies post a massive 311/6 against India in the second ODI at Queen’s Park Oval.

A memorable ? for Shai Hope ?

He’s the tenth to score a hundred in their 100th ODI!

Electing to bat first, Hope took his time to settle in as his opening partner Kyle Mayers went hard on the Indian bowlers in the powerplay. Continuing from where he left off in his 74 in the first ODI, Mayers plundered six fours and a six, five of which came against debutant pacer Avesh Khan, who came in for Prasidh Krishna in the playing eleven.

But his joyride came to an end at 39 off 25 balls, falling to Deepak Hooda by chipping a straight catch back to the off-spinner. Shamrah Brooks joined Hope and added 62 off 74 balls for the second wicket.

Brooks consistently found boundaries through backward point and leg-side before trying to defend against Axar Patel, only for the ball to take the outer edge to captain Shikhar Dhawan at first slip. One brought two for India as Brandon King’s top-edge on a slog-sweep was caught easily by Dhawan off Yuzvendra Chahal.

Hope, who brought his fifty by slog sweeping Yuzvendra Chahal over deep mid-wicket for a huge six, welcomed Avesh with a glorious drive through wide of mid-off and took a boundary each off Patel and Hooda.

From there, Pooran used his feet brilliantly to smash sixes in the ‘V’ four times to reach his fifty in quick fashion. Post that, Pooran enthralled Sunday crowd with few more lusty hits. The 117-run stand between Hope and Pooran ended when Thakur bowled the West Indies skipper around his legs.

Hope marched on to reach his 13th ODI century in the same fashion when he got his fifty: dancing down the pitch to launch a six over Chahal’s head. Hope and Rovman Powell smashed three boundaries overall before Thakur took the latter out by holing out to long-off.

Hope holed out eventually for 115 but boundaries from Romario Shepherd and a six by Akeal Hosein in the final over was enough to get West Indies past the 300-mark and survive their full quota of overs for the second time in as many matches. 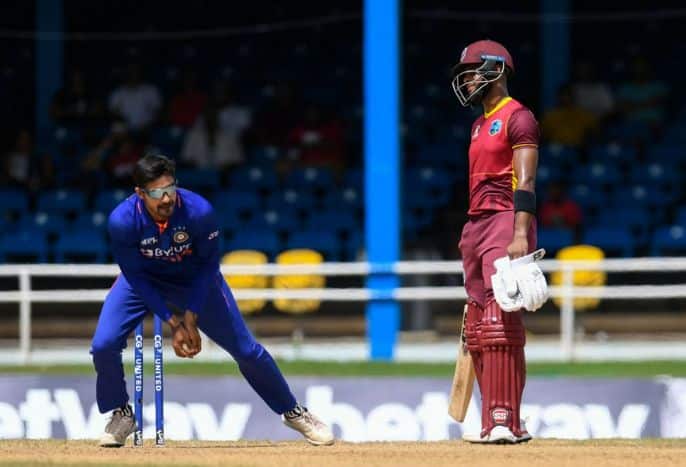