Shaiman Anwar looks set to get a big score yet again

Shaiman Anwar has reached his third fifty in One-Day Internationals (ODI) against Pakistan in ICC Cricket World Cup 2015, Pool B Match 25 at Napier. Anwar is continuing his good run of form in this tournament after he scored an excellent century against Ireland. Anwar put on a 50-plus with Khurram Khan, who was dismissed for 44 earlier. LIVE BLOG: Pakistan vs UAE

Pakistan will feel that they have made an excellent start to the bowling after they struck thrice in the opening 10 overs. An excellent partnership by Khurram and Anwar pulled things back to a certain extent but that was never going to be enough when you’re chasing a score of 340 runs to win. UAE have put up a spirited effort considering their pathetic batting performance against India. SCORECARD: Pakistan vs UAE in ICC Cricket World Cup 2015

UAE had earlier won the toss and elected to bowl first. Pakistan had need to win this game to have a chance of making it to the last eight of the tournament. They are on course to winning this match and give UAE a thrashing. This loss for UAE will mean that they are effectively out of the tournament. LIVE CRICKET STREAMING: Pakistan vs UAE 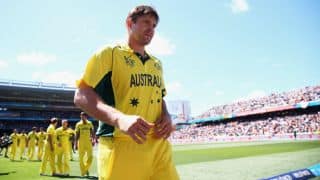