Shaiman Anwar notched up the first-ever T20I century for United Arab Emirates (UAE) to help his side beat Papua New Guinea (PNG) by 30 runs, in the second match to seal the series 2-0. In a three-match T20I series, UAE had earlier won the first game by 5 wickets with 29 balls remaining, and on Friday, they continued their domination to hand PNG yet another defeat on this tour. Anwar smacked as many as 10 boundaries and 6 sixes to score 117 not out, which powered United Arab Emirates to a huge score of 180 for 3 in their 20 overs, which at the end proved to be too many for the PNG side. FULL CRICKET SCORECARD: United Arab Emirates (UAE) vs Papua New Guinea (PNG), 2nd T20I

Papua New Guinea s decision to field first after winning the toss and electing to bat proved to be an incorrect one, as the dominant UAE team put up a score which was beyond them. PNG could manage a mere 3 wickets, and when it was their turn to score 181 to win, they were bowled out for 150 in 20 overs. Amjad Javed and Mohammad Naveed claimed 3 wickets each for UAE, whereas Rohan Mustafa, Ahmed Raza and Imran Haider claimed one apiece. For PNG, Jack Vare remained the top-scorer with 38.

UAE were off to a poor start when they lost openers Rohan and Naveed for 4 each, and at one stage, the home side were struggling at 9 for 2 in the first over. This was when Anwar and Mohammed Qasim got together. Anwar and Qasim added 62 runs for the third wicket, but the biggest partnership in the match turned out to be for the fourth.

PNG bowler John Reva struck in the 10th over to break the stand, but Rameez Shahzad got together with Anwar and added as many as 102 for the fourth wicket. While Anwar went on to score his century, Shahzad scored a 30-ball 29 not out with 2 boundaries. For PNG, Norman Vanua claimed 2 for 41 off 3 overs.

In their reply, Papua New Guinea were off to a rollicking start. Tony Ura and Lega Siaka combined to add 42 for the opening wicket inside the first four overs, putting PNG on the right track. However, Javed and Rohan combined to get rid of these two batsmen. Rohan also accounted for the third wicket in form of Assad Vala, who fell for 1. Ura scored a 13-ball 20 with 4 boundaries whereas Siaka stroked 1 six and 2 boundaries to score 25 off 14 balls.

Mahuru Dai fell for cheap as well, which left PNG struggling at 70 for 4 in the eighth over. Sese Bau and Jack Vare added 34 for the fifth wicket, but their partnership was the last that PNG had in name of resistance. Bau scored a 22-ball 30 with 2 boundaries and 1 six, whereas Vare top scored with 38 off 36 balls, hitting a mere 2 boundaries.

Naveed was the pick among the bowlers for UAE with his figures of 4-0-18-3, whereas Javed claimed 3 for 38.

The third and final match will be played on Friday itself, at the same venue of Sheikh Zayed Stadium in Abu Dhabi. 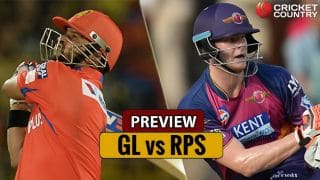