Both the players pleaded guilty to Level 2 breaches of the ICC Code of Conduct.

Bangladesh’s all-rounder Shakib Al Hasan and Afghanistan’s Dawlat Zadran was fined 50 per cent of their match fees on Sunday for breaching ICC Code of Conduct during their team’s qualifier match on Sunday ahead of the ICC World Twenty20 (T20) 2014 main draw.

According to ICC’s statement, “Both players were found to have breached Article 2.2.4 of the ICC Code of Conduct for Players and Player Support Personnel, which relates to ‘inappropriate and deliberate physical contact between Players in the course of play during an International Match’.”

“The charges were laid by on-field umpires Richard Illingworth and Nigel Llong, third umpire Kumar Dharmasena and fourth umpire Richard Kettleborough, all from the Emirates Elite Panel of ICC Umpires,” as stated by ICC’s official website.

Ranjan Madugalle of the Emirates Elite Panel of ICC Match Referees felt that there was no need for a full hearing.

Madugalle said, “Cricket is a non-contact sport and the teams were reminded at the pre-tournament briefings that intentional and avoidable physical contact of any form is unacceptableand these judgments reflect that.” Douglas Carr: The man who perfected the googly 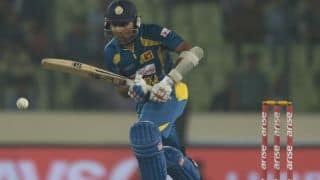