Currently, Bangladesh are 105 for the loss of five wickets in 29 overs with Mushfiqur Rahim on seven.

Bangladesh’s star all-rounder, Shakib Al Hasan was dismissed for mere 10 by all-rounder, Ravindra Jadeja after being comfortably caught by Mohammed Shami at backward point, during the chase against defending champions, India, in the 2nd quarter-final of the ICC Cricket World Cup 2015 at the Melbourne Cricket Ground (MCG) in Melbourne on Thursday. Currently, Bangladesh are 105 for the loss of five wickets in 29 overs with Mushfiqur Rahim on seven and Sabbir Rahman on one. Live Cricket Updates and Commentary: India vs Bangladesh, ICC Cricket World Cup 2015 Quarter-final 2 at Melbourne 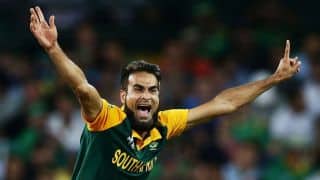 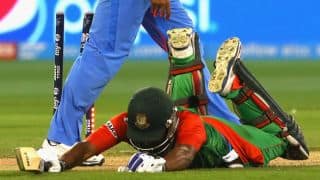