With Bangladesh needing 6 off 2, Shakib came down near the boundary line and almost called Mahmudullah and Rubel Hossain off the field.

It was high drama in the final over of the 6th T20I of the Nidahas Trophy 2018 between Sri Lanka and Bangladesh. With emotions running high, it was Bangladesh skipper Shakib Al Hasan, who halted play in the middle. With Bangladesh needing 6 off 2, Shakib came down near the boundary line and almost called off Mahmudullah and Rubel Hossain. Shakib was seen furious while talking to the fourth umpire near the boundary line.

His actions, prompted fans and critics of the game to take on Shakib on Twitter. Shakib in his defence in the post-match conference said: “We always had a healthy competition on the ground (with Sri Lanka); outside, we are friends. Emotions take over sometimes. I need to be careful as the captain and the leader of the team.”

If Rabada can be handed a 2 match ban, half the players from @BCBtigers and @OfficialSLC should be banned for what they did tonite. @ICC ???

You have won the game. You have a problem with officials. At least shake hands with the opposition!!! #NidahasTrophy2018

Ugly scenes after completion, but what a match! Sri Lanka’s recovery superb, but clearly not good enough. Sensational finish by Mahmadullah

Haven’t seen such ugly scenes on the cricket field.. umpires made the mistake by not calling the second ball of 20th over a no-ball and Shakib almost forfeited the match! Good that better sense prevailed & Mahmudullah took Bangladesh to a thrilling win.#SLvBAN #NidahasTrophy2018

@Isam84 bhai… it brings back memories of an Indian umpire actually fiddling with his hat after raising the finger to give Ajay Jadeja out in 1997. This was just the Sri Lankan version of it. On both occasions, the team wronged won the match… https://t.co/6ussDsS0tb

Bangladesh now play India in the final of Nidahas Trophy 2018. 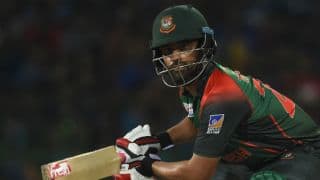