The first T20I will be played at Dhaka on February 15 and the second at Sylhet three days later.

Captains of Sri Lanka and Bangladesh were ruled out of the Test series. Angelo Mathews had the same old hamstring problem, while Shakib Al Hasan had injured his hand during the tri-series last month. Mathews, however, was ruled out for the T20I series as well, and now, Shakib follows suit, though he is likely to be available for the second T20I of the two-match series.

“His stitch was cut yesterday and it will take seven days for him to recover. We hope to get him in for the second game as the rehabilitation will take a week,” Bangladesh chief selector Minhajul Abedin told Cricbuzz.

Shakib was handed the captaincy duties ahead of the Test series against Sri Lanka. In his absence, Mahmudullah was placed at the helm. Bangladesh lost the series 0-1.

The first T20I will be played at Dhaka on February 15 and the second at Sylhet three days later. 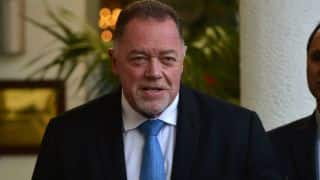