Mahmudullah smacked his second consecutive hundred with a 123-ball 128 in their three-wicket loss to co-hosts New Zealand.

Mahmudullah smacked his second consecutive hundred with a 123-ball 128 in their three-wicket loss to co-hosts New Zealand on Friday. Reflecting on Mahmudullah’s performance, Shakib said that the all-rounder needs to continue his form, adding that he was in great touch so hopefully he could contribute with bat and ball, The Dawn reported. Top 10 bowlers in ICC Cricket World Cup 2015

In light of his team’s three-wicket defeat to New Zealand, Shakib said that he thought they played really well, the way they batted was good and they bowled well too and kept it tight, adding that they could take a lot of positives from the game and hopefully they could take that into the quarterfinals. ICC Cricket World Cup 2015: Complete Coverage 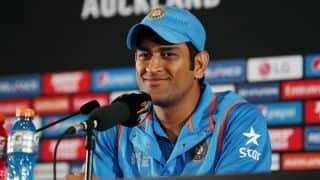 MS Dhoni: While chasing, it’s important to break the number of runs into small criterion