Shillingford missed the world record by just one ball.

Shillingford’s fireworks were unable to stave off defeat, but it gave the crowd at Kingston something to cheer about. Shillingford’s 29-ball whirlwind of an unbeaten 53 included five sixes and three boundaries. He was especially severe on eventual man of the match Mark Craig and young leg-spinner Ish Sodhi. 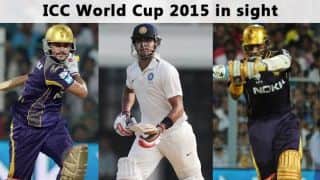