Shane Shillingford has an uphill task ahead to make a comeback: Former cricketers

Shane Shillingford has an uphill task ahead to make a comeback: Former cricketers

Former West Indies cricketers, Davis and Gray, believe it will be an uphill struggle for Shillingford.

The International Cricket Council (ICC) announced on Monday that Shillingford was suspended from bowling in international matches after his actions were found illegal, reports CMC.

Davis, former West Indies batsman, says it will be difficult for the 30-year-old Shillingford to bounce back a second time.

Shillingford was suspended from bowling in international cricket three years ago but was cleared six months later after he underwent remedial action on his bowling.

“I think it will be a severe test of character for him to be under the microscope and to try and come back again,” Davis said.

“I think it is a sad situation and it will be very difficult for him to come back. It will be a severe test and I really think it will be hard for him to concentrate and I cant see him coming back from this one.”
West Indies coach Ottis Gibson has said that the West Indies Cricket Board (WICB) will give full support to Shillingford and Samuels and that work to rehabilitate their bowling will begin in the New Year.

However Gray, the former fast bowler is not so optimistic.

People can come back but it will be highly difficult for him and it will not take two months or three months, it will probably take a year, said Gray, who played in five Tests and 25 One-Day Internationals (ODIs) for the West Indies.

This guy (Shillingford) is 30 years old and these habits he has been developing since perhaps he was 16 years old, so it will be very difficult for him to rectify his action and if he does, he might not be as effective.”

The ICC also ruled that Marlon Samuels’ action revealed that the spinner’s standard off-break delivery was legal but the quicker delivery exceeded the prescribed levels of tolerance.

Samuels is allowed to continue his off-break delivery in international cricket, but banned from bowling his quicker balls. Allan Border Medal 2014 to be held in Sydney 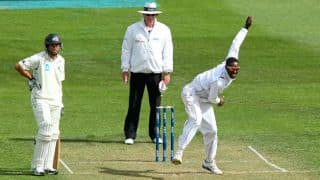