Australian spin legend Shane Warne on Monday accepted the one-match ban and USD 4,700 fine imposed on him for an ugly confrontation with West Indian Marlon Samuels during a Big Bash Twenty20 clash, conceding that he went too far. 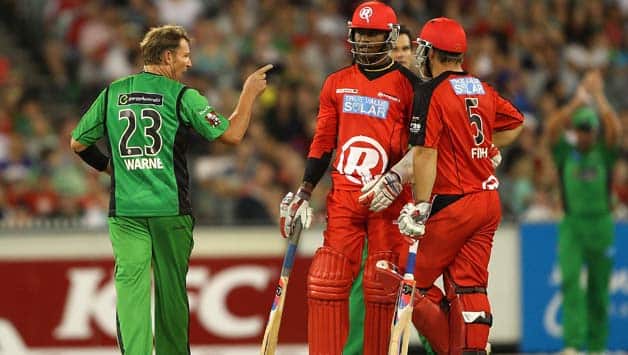 Australian spin legend Shane Warne on Monday accepted the one-match ban and USD 4,700 fine imposed on him for an ugly confrontation with West Indian Marlon Samuels during a Big Bash Twenty20 clash, conceding that he went too far.

Warne and Samuels had to be separated by the umpires after a bust-up that involved an angry exchange of words.

After a hearing on Monday, Warne, who is leading the Melbourne Stars, was slapped with a one-match ban.

Samuels’ hearing, meanwhile, would be conducted later as he is nursing an eye injury picked up during the match. The Caribbean player is competing for Melbourne Renegade in the T20 event.

“I have decided to accept my penalty of a 1 match ban ! Let’s hope the boys can win tomorrow & we can make the semi finals…” Warne tweeted.

“Thanks for support guys, sport can be an emotional & at times very passionate too. I went to(o) far in trying to stand up for the team !!!” he added. (sic)

In an earlier tweet, Warne had stated that he considered the punishment harsh.

The mercurial spin legend had thrown the ball at Samuels’ chest during the match. In reaction, the Jamaican tossed his bat towards the Australian. Both the players then confronted each other before being separated by the umpires.

Cricket Australia charged both players with multiple breaches of code of behaviour. Warne was found guilty of three of four offences.

The veteran leg-spinner was punished for showing dissent at an umpire’s decision, using obscene language and deliberate physical contact.

But the charge of throwing the ball at or near the West Indian in an “inappropriate and/or dangerous manner” was dropped.

Warne said he was disappointed with his behaviour but maintained that the punishment was harsh.

“Yes I went a bit to far with my emotions and passion, but was standing up for my teammate & trying to get us back in the game… (sic)

“Lastly, will take my penalty on the chin, as I was disappointed with some of my actions, in my opinion though the penalty is very harsh..” he tweeted. (sic)