Shane Warne could be hired by Cricket Australia as spin consultant

Shane Warne could be hired by Cricket Australia as spin consultant

Muttiah Muralitharan had also guided Australia regarding spin in the series against Pakistan.

With Australia suffering heavy defeat at the hands of Pakistan in the recently concluded two-match Test series at UAE, the Cricket Australia is highly concerned regarding the team’s ability to play spin and has sought help from Australia’s spin legend, Shane Warne.

Australia have also set their sights on the Ashes which follows right after the World Cup next year and have made sure that they need to get their team spin-ready as there would not be any pace on the typical England tracks, according to The Daily Telegraph.

Warne earlier was the spin consultant for the team during the tour of South Africa earlier this year and his tips as well as advise for spinner, Nathan Lyon turned out to be really useful.

However, CA is concerned that Warne’s spin advice alone won’t solve the problems for Australia, especially in the sub-continent and they would need other tips and advice from other experts as well. They fear that Australia might have not moved on from the 4-0 whitewash they suffered last year against India at the sub-continent and this could in-turn help the Indians psychologically when they tour Down Under later next month.

Australia is due to play Bangladesh, England and West Indies in the upcoming years and expect spin competition from them as well. However, their real sub-continental test would be in 2016 when they tour Sri Lanka.

Apart from Warne, Australia is also thinking of bringing back John Davison as the other consultant for the team and would be handy if he works with Lyon and other spinners at the nets with his useful bowling tips.

However, Australia can still be back to the top of the Test rankings if they happen to beat India in the upcoming series with a margin of 3-0 or 4-0; but it won’t solve their problem against spin bowling on the sub-continent pitches.

Warne, who is currently 45-years old has previously worked with spinners like Fawad Ahmed and James Muirhead, who play for Victoria, Melbourne.

Apart from him, Sri Lankan great, Muttiah Muralitharan had also guided Australia regarding spin in the recently concluded series against Pakistan in UAE; however, it was of no help as the visitors slumped to a 2-0 series whitewash.

Pat Howard, Australia’s high performance manager however gave no excuses for the heavy defeat suffered by the Australians and indeed praised the Pakistan team for their superb performance in the Test series overall.

“No one is blaming a coin toss or the pitches that we played on. Pakistan showed just how well a team can bat on those wickets and they deserve a lot of credit for how they performed. All aspects of our game — batting, bowling and fielding were well below par,” he said.

“To be a great side, we have to be able to win consistently on the road and it’s clear we still struggle to cope with dry, sub-continental conditions. (There is) no overnight solution. It will take time and hard work,” he added. 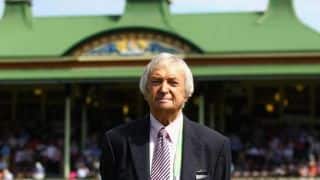 Richie Benaud to resume commentary a year after car accident