Bowling legend Shane Warne has revealed how he would have countered Virat Kohli if the two were pitted against each other.

Bowling legend Shane Warne has revealed how he would have countered Virat Kohli if the two were pitted against each other.

Kohli recently struck back-to-back centuries against Australia to move to 41 ODI centuries and in Ranchi went past Rahul Dravid to become the third highest run-getter in the format for India.

“I’d be bowling wide of off stump and letting him try to cover drive with a slip, short cover and some protection out there. So then it’ll be very hard for him to get it over the leg side. That’s what I’d be trying to do and hopefully get a little bit lucky and he mis-hits one,” Warne told ESPNcricinfo.

Warne, who played 145 Tests and 194 ODIs between 1992 and 2005, also revealed how bowlers can counter Kohli by cutting down his scoring areas.

“I think the one thing you need to do with Virat, which is one thing teams don’t do enough of, is take away both sides of the wicket. If you’re going to bowl to Virat Kohli, you either bowl at leg stump and protect the on side, or you bowl wide of off stump and you protect the off side. You cannot bowl at the stumps, because he can hit you both ways. So, I think you’ve to take out one side of the field. Protect just one side of the field, that’s how you bowl to very good players,” he said.

Kohli has scored 10816 runs in just 217 innings and there’s a red-hot debate that pits him against some of the legends of the game for the mantle of the greatest batsman to have played the game.

Comparisons to Sachin Tendulkar have been going on for some time as the 30-year-old is in hot pursuit of some of the legend’s ODI records.

When asked whether Kohli is the best ever, Warne said, “I got asked the question last night and again this morning: is Virat Kohli the best player in one-day cricket? Is he better than Tendulkar, is he better than Lara? I’m still thinking about it, I’m still trying to work that out.

He continued, “The one thing we can say is I don’t think we have seen anyone dominate one-day cricket like Virat Kohli has. The best player I saw – [Don] Bradman’s the best so he doesn’t even come into the equation – but Viv Richards is the best player I saw. As a player, playing against them, Lara and Tendulkar were the two best players that I bowled to.” 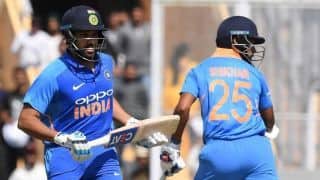