Bumrah changed the game by picking two crucial wickets in his two consecutive overs to shatter the hopes of England on the final day of the fourth Test at Oval.

London: Legendary spinner Shane Warne and former England captain Michael Vaughan on Monday showered special praise on India’s premier pacer – Jasprit Bumrah whose match-changing spell of fast bowling scripted a historic win for Team India in the fourth Test at Oval. Bumrah picked up the wickets of Ollie Pope (2) and Jonny Bairstow (0) which broke the back of English batting in the second session of day 5 in the Oval Test. During his spell, Bumrah bowled a lethal mix of yorkers and unleashed sharp incoming reverse swinging deliveries which proved too hot to handle for the hosts’ batters.

The 27-year-old became the fastest Indian pacer to reach 100 wickets in Test cricket. He achieved the feat in his 24th Test matches, he reached the milestone mark when he cleaned up Pope (2). Warne termed the outstanding bowling by Bumrah as the “spell of the summer.” “Take a bow @Jaspritbumrah93! That spell of 6.3.6.2 was outstanding and the spell of the summer so far. A class above any other fast bowler in this test match on a flat wicket! Outstanding,” Warne tweeted.

Former England captain in the second session predicted that India would go 2-1 up. “This really is incredible bowling by @Jaspritbumrah93 !! Test cricket bowling at its best … India about to go 2-1 up,” Vaughan tweeted.

Former India bowler Irfan Pathan is next on the list, having reached 100 wickets in 28 matches while pacer Mohammad Shami occupies the fourth spot.

Meanwhile, England batsmen failed to rise to the challenge of battling it out against the Indian bowlers in the second session after the visitors took the honours in the first session of the fifth morning in the fourth Test at the Kennington Oval. 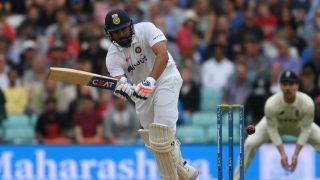