Shane Watson is fired up by the prospect of opening for Australia in the Ashes 2013 series in England, the all-rounder said on Thursday. 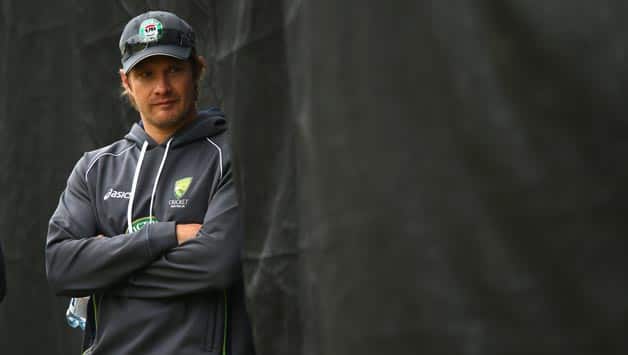 Shane Watson is fired up by the prospect of opening for Australia in the Ashes 2013 series in England, the all-rounder said on Thursday.

Australia’s squad contains several openers but new coach Darren Lehmann has said he wants Watson at the top of the order.

Watson did his best to play himself into some sort of form with a rapid 90, off just 94 balls and including 20 fours, on the second day of Australia’s tour match against Somerset at Taunton on Thursday as the visitors closed on 266 for four in reply to the west country county’s 320.

After a rain-shortened day, Watson spoke of his delight at the vote of confidence he’d received from former Australia batsman Lehmann, brought in after South African Mickey Arthur was sensationally sacked just 16 days before the first Ashes Test at Trent Bridge on July 10.

“It’s nice to get that confirmation and it’s a hugely exciting challenge for me,” said Watson, one of four players controversially dropped during the 4-0 Test series loss in India in March for failing to provide written feedback on the team’s performance requested by Arthur.

“Darren is very up front about things, from my experience of him, but he also does care when he needs to,” added Watson. He is black and white in a really good way.

“It’s nice for me personally to know I have the backing of the coach and the opportunity to open is something I am very excited about. I didn’t know exactly what my role would be until Darren took over as coach. I had a few chats with Michael Clarke and Mickey Arthur about it, but there was no confirmation.”

“Darren has been more definite about where he wants me to bat.”

“It doesn’t mean any more security because if I am not performing I can’t expect to get picked. But I’m very happy about it.”

England hold the Ashes after a 3-1 series win in Australia in 2010/11 and also won the preceding Ashes clash in England in 2009.

Much of their recent success against Australia has been built on penetrative swing and seam bowling, with Watson saying England’s attack represented the “ultimate challenge” for an opener, a role he was thrust into in 2009.

“Taking on the quicks with a brand new ball is something I never knew I would enjoy until the last Ashes series here in 2009,” he said.

“Ricky Ponting gave me the opportunity through the middle of that series and it’s something I did and do love.
“I feel my game and my mentality is now suited to opening the batting.

“The English quicks are as good as there are in the world at the moment and have been for the last few years.

“It is the ultimate challenge to take on the best bowlers with a brand new ball in what sometimes will be bowler-friendly conditions.

“If I can’t get up for that, there is no point in playing.”

As for his bowling, the 32-year-old medium-pacer added: “Certainly opening the batting means I can’t bowl as much. But I know I can contribute with the ball and I do love bowling.”

As for Australia’s chances of regaining the Ashes, Watson said: “We are obviously the underdogs coming into the series and we haven’t played well, especially in India a few months ago.

“We know we are going to have to be at our best very consistently throughout the series to have the success we want. England have a very good side, which has been the case for quite a while now.

“It’s going to be a massive challenge for us and we are all very excited about it.”