In a television interview to promote his autobiography, the retired Michael Clarke spoke of stormy relationships during his long career.

Shane Watson has hit back at Michael Clarke’s claim he was part of a group that was “like a tumour” in Australia’s cricket team, saying it reflected poorly on the former captain. In a television interview with Australia’s Channel Nine to promote his autobiography, the retired Clarke spoke of stormy relationships during his long career. This included with Watson, who was one of four players suspended by then-coach Mickey Arthur and captain Clarke for the third Test against India in Mohali in 2013. Vice-captain Watson was suspended and sent back to Australia for not doing his “homework”, after he failed to provide a written report on how to improve the team’s performance. ALSO READ: Management would have sacked Ricky Ponting if he had not retired, says Michael Clarke

Clarke denied singling out the all-rounder as a “cancer” on the team, a claim made by Arthur in documents connected to legal action over his sacking three years ago. But he admitted saying Watson was one of a number of players who were “like a tumour, and if we don’t fix it, it’s going to turn into a cancer”. Watson, who has also retired from international cricket, said it was pointless reopening old wounds. “For me I think it was more a reflection of the person he is more than what it was directed towards me,” Watson told Fox Sports late Tuesday.

“In the end it is really disappointing that things like that start to come out two or three years later on when we are all very content in retirement.” On Monday, Clarke had described Watson as part of a group that was like a tumour on the team. Star batsman Clarke also spoke of his notorious dressing-room bust-up with Simon Katich, who grabbed the then vice-captain s throat during a disagreement about when the team song should be sung after Australia s Test win against South Africa in 2009. ALSO READ: Michael Clarke: Coach, team management have too much say in Australia cricket

However, he later denied labeling all-rounder Watson a cancer on the team, a claim made by Mickey Arthur in documents connected to the former coach s legal action against Cricket Australia following the South African s sacking three years ago after a 4-0 defeat in India. 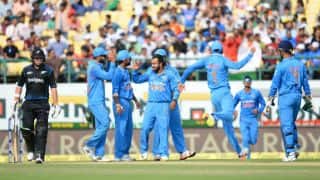 India vs New Zealand 5th ODI to be moved out of Vishakapatnam?