Former South Africa all-rounder Lance Klusener says Shane Watson of Australia is the best in the business when it comes to performing with both bat and ball at the moment. 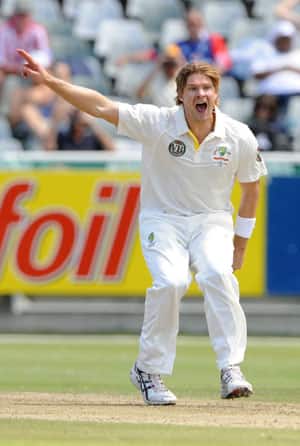 Shane Watson has taken his game to the next level, Lance Klusener said Getty Images

Former South Africa all-rounder Lance Klusener says Shane Watson of Australia is the best in the business when it comes to performing with both bat and ball at the moment.

According to Klusener, the Aussie has taken his game to the next level.

“Shane Watson of Australia I think is really good. He is the best all-rounder at the moment. The way he has improved over the years and taken his game to the next level, is incredible,” said Klusener after South Africa beat India in the World Cricket Legends 12-over-a-side game in the Wild, organised by Beyond Boundaries.

Speaking on South African cricket, the 40-year-old hoped Gary Kirsten would be able to replicate India’s success as the coach of the Proteas and help them get rid of the chokers’ tag.

“It is just a stupid thing (the chokers’ tag) that we can’t get over it. The team has done a great job but people will talk about it till we actually win major events,” said Klusener.

“Gary Kirsten knows what to do and that is something I think should help South Africa cricket. What he did back in India was really good,” he added.

Taking a walk down memory lane, Klusener recollected his Man-of-the-Series performance in the 1999 World Cup, when he almost single-handedly steered South Africa into the final of the mega-event before losing to Australia in the semifinal, thanks to a terrible mix-up between him and Allan Donald.

“I just think it was wonderful. We played well, came together and that was the most important thing though it was disappointing that we could not get over the mark. Had that happened it would have been wonderful,” Klusener, who scored 250 runs and took 17 wickets in eight matches in the tournament, said.

In the semifinal, South Africa needed nine runs off the final over and Klusener hit the first two deliveries for four.

Requiring just one to win, the third ball went straight to a fielder but Donald was already half way down the pitch and would have been run out if Darren Lehmann had hit the stumps.

There was no let-up from Australia in the fourth delivery as non-striker Donald fell short of the crease after a desperate Klusener almost made it to the other hand.

Donald was run out and South Africa were all out with the scores tied, but Australia progressed to the final thanks to an earlier win over the Proteas.

Klusener, however, stressed that the incident does not haunt him anymore.

Klusener’s fine run continued after the 1999 World Cup and he was voted as a Wisden Cricketer of the Year in 2000.

Many, however, believed that he still had some cricket left in him and when asked if he ever thought of coming out of retirement, Klusener said, “People always remember you when you are playing at your very best but then the body slows down. So you really look up to those standards.

“So after the retirement, I never thought of coming back again.” (PTI)