The final T20I is a dead rubber as India have already won the three-match series.

Shane Watson was named interim skipper for Australia for the third Twenty20 International (T20I) at Sydney on Sunday. Watson will lead in the absence of Australia’s regular T20I skipper Aaron Finch who sustained a hamstring injury while batting in their second T20I at Melbourne on Friday. Meanwhile, Finch’s injury has given Usman Khawaja a great opportunity to finally make his T20I debut for Australia, who will mostly bat in the top-order. “It is an honour to be asked to lead the side on Sunday, although the circumstances are far from ideal,” Watson said ahead of the dead rubber Sydney match. FULL SCORECARD: India vs Australia, 3rd T20I at Sydney

According to cricket.com.au, Watson went on to add, “We may have lost the series but there is a great deal to play for with the ICC World Twenty20 coming up and you can be sure we will be determined to do well in Sydney.”

With Steven Smith, David Warner and George Bailey to have already departed to New Zealand to begin preparation for Australia’s upcoming tour of New Zealand, Watson was the obvious choice to lead Australia in the final T20I.

It is a great opportunity for Watson, who a couple of months earlier had admitted that he was coming to an end of his international career. He had said that when he was dropped from the Ashes last year and then One-Day International (ODI) series against India towards the end of last year. Watson was surprised after being recalled for the ongoing T20I series. He had said, “After being dropped from the one-day squad I knew my international days were probably nearly over, so it was nice to get that surprise and to get that call from [selector] Rod Marsh yesterday.” 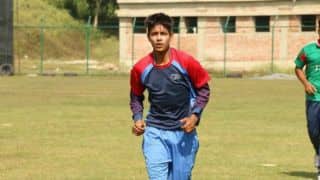