Shane Watson‘s effort of a 42-bal 66 helped Quetta Gladiators chase Lahore Qalandars’ low total to win the fifth match of Pakistan Super League (PSL) 2018. Winning the toss at the Dubai International Cricket Stadium on Saturday, Sarfraz Ahmed put Brendon McCullum led Qalandars to bat. Their batting collapsed in front of the Gladiators’ skillful bowling and they set a target of 120 to win the match. Watson and Asad Shafiq’s opening partnership provided a major boost to the Gladiators to chase down the target with 6 overs still remaining.

Though McCullum and Sunil Narine took the team off to a stable start with 46 runs on the board, after their departure, others failed to carry forward the momentum. Apart from the openers, only Sohail Akhtar touched the 20-run mark. Young Barbados pacer Jofra Archer bagged the wicket of Fakhar Zaman which triggered the collapse. He finished with figures of 3 for 23. With rest of the Gladiators bowlers contributing their bit, Qalandars were restricted at 119 for 9 at the end of their innings.

Watson and Shafiq provided Gladiators with an aggressive start. The openers put up a 92-run partnership off 70 deliveries. Watson scored half-century and hit 5 fours and 5 sixes in his 66-run innings before getting bowled off Sunil Narine’s delivery. Narine was the only successful bowler for the Qalandars, as the Gladiators posted a 9-wicket victory.

Registering their first win of the season, the Gladiators now occupy the fourth spot in the points table while the Qalandars are at the bottom, with two losses in both their matches. 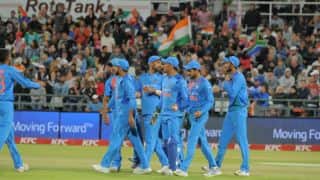