Sharad Pawar tendered his resignation from the president's post of the Mumbai Cricket Association (MCA) on Saturday.

Mumbai: The Board of Control for Cricket in India (BCCI)’s fight to stall the reforms directed by the Supreme Court suffered a telling blow as veteran politician Sharad Pawar tendered his resignation from the president’s post of the Mumbai Cricket Association (MCA) on Saturday. The former International Cricket Council (ICC) and BCCI president is one of the biggest name in BCCI administration and he has stepped down adhering to the norm of age-cap of 70 years as prescribed by the Lodha panel stating that he is “hurt” by the perception that people stick around in BCCI as it is “lucrative”.

“The Supreme Court has taken a decision that officials above 70 years of age should not remain in cricket bodies. This decision is applicable to me. That is why I am resigning from the position of MCA president and I request you (secretary) to accept it,” the NCP supremo said in his resignation letter to MCA, submitted during the association’s Emergent Managing Committee meeting. The MCA managing committee will meet soon to decide whether to accept it or not, said its joint secretary PV Shetty after another committee member, Vinod Deshpande, read out the resignation letter submitted by Pawar to the media. Pawar was in his second innings as president of the MCA after being elected last year for a two-year term. He had been MCA’s president between 2001-02 and 2010-11. In his letter to the MCA, Pawar said that he was “hurt” by the word “lucrative”, an observation by apex court to describe as to why people do not want to leave BCCI.

“While taking the decision regarding cricket, the Supreme Court has said that the officials should not be above 70 years of age and they have described these positions as “lucrative” which made me very sad and that’s why I don’t have any wish to work any more,” he wrote in the letter. “In reality the positions are filled through democratic means. Since these appointments were happening through democratic means, I was happy to work in that position,” he said in the letter.

“During my term as MCA president, I did not take any allowance or get any financial benefit. I and my colleagues have given time and taken the entire responsibility for our work in the association. While building new facilities, we took care that the name of MCA will be taken with pride. The Supreme Court should have taken a note of this,” he wrote further in his resignation note. 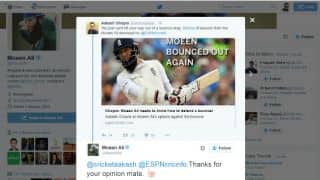