The Sharjah Cricket Association Stadium, which stopped hosting international cricket matches following revelations that it was a hub for match-fixing in the nineties, is set to mark its return to the cricketing scene. 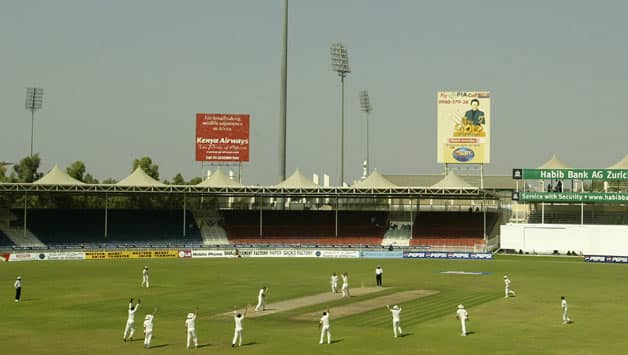 The Sharjah Cricket Association Stadium, which stopped hosting international cricket matches following revelations that it was a hub for match-fixing in the nineties, is set to mark its return to the cricketing scene.

Waleed Abdulrahman Bukhatir, vice-chairman of the Sharjah Cricket Club and an executive member of the Emirates Cricket Board (ECB), told Gulf News, “We are working hard to recreate the same glory that made Sharjah a special venue. The officials from the ICC (International Cricket Council) visited the stadium to assess whether the changes have been made according to their rules. We have fully followed the norms so that the stadium can be used for bigger tournaments in the coming years.”

“We are thankful to Shaikh Nahyan Bin Mubarak Al Nahyan, Minister of Higher Education and Scientific Research and the president of the Emirates Cricket Board for allotting these international matches to Sharjah,” said Bukhatir.

Waleed s father, Abdul Rehman Bukhatir, was the pioneer in bringing cricket to the United Arab Emirates (UAE), and had earlier allowed the Afghanistan cricket team to use the venue as their home ground in 2010 due to unrest in their country.

The stadium, which has hosted numerous One-Day Internationals (ODIs) through the eighties and nineties, is today the home ground for three teams Pakistan, Afghanistan and the UAE. The triangular series it used to host was among the most popular tournaments in the world at one point of time. In fact, it the stadium recently found its way into the Guinness World Records for hosting the maximum number of ODIs.

Vin Sharma, Group Talent Manager of Guinness World Records presented a certificate commemorating the landmark to Shaikh Nahyan. Sharma told Gulf News, “To officially present the record is an amazing feeling both personally and professionally. As a child, I grew up watching those great matches that were held here, especially the India-Pakistan contests. It is a historic stadium and it deserves to be in the Guinness Book of Records.”

The stadium has, in the recent past, hosted matches between Afghanistan and Pakistan, and also Afghanistan versus Australia. Pakistan and Sri Lanka even played a Test match here in November 2011.

Bukhatir said that the 27,000-seating capacity of the stadium had to be reduced to adhere to ICC stipulations. Special areas for players and officials will be constructed instead.

Mazhar Khan, secretary of the Sharjah Cricket Council said: “This is a common man s stadium. Almost all cricket fans love to be here and even now, like in the past, almost every matches end in a thrilling finish.”

The stadium will also host the prestigious 2014 ICC Under-19 World Cup.