Shashank Manohar on Thursday said his resignation from ICC had nothing to do with the BCCI as speculated in various sections of media.

New Delhi: A day after stepping down as independent chairman of the International Cricket Council (ICC), Shashank Manohar on Thursday said his resignation had nothing to do with the Board of Control for Cricket in India (BCCI) as speculated in various sections of media. Stressing that he resigned from the top post due to personal reasons, the 59-year-old Manohar said he had already made up his mind even before meeting the Supreme Court-appointed Committee of Administrators (CoA), which is presently running the BCCI, a day before he resigned. “It has nothing to do with the ICC functioning or these issues which are going to come up. Personal reason means genuinely personal. And I don’t lie,” Manohar was quoted as saying by espncricinfo. Shashank Manohar s resignation from ICC surprises BCCI

Manohar also turned down any plans of reconsidering his decision. Manohar said he had revealed to CoA members Vikram Limaye and Vinod Rai, during his meeting on Tuesday, that he was going to leave the ICC. “I told them before the meeting started that I had discussed my resignation with my wife yesterday only, and I am likely to resign. I have a message from the CoA today that yesterday you told us that you were going to resign, but we were surprised. We never thought you were so serious.” Shashank Manohar resigns as ICC Chairman

In a statement following Manohar’s resignation, the BCCI expressed its “surprise” at the “sudden decision”. “Manohar’s contribution to Indian cricket is invaluable. He is a man of few words but excellent deeds. The BCCI Committee of Administrators (CoA) was looking forward to long-term cooperation between the ICC and BCCI with Manohar at the helm of affairs,” the Indian board said in a statement.

Manohar said he could not have revealed his decision earlier to the ICC but maintained that he was happy with the work he had managed to accomplish during his eight-month tenure. “Most of the directors would not have allowed me to resign,” he said and added that he could not say whether he had disappointed the ICC board by leaving at this critical juncture 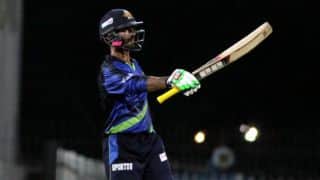