Kings XI Punjab are struggling in their chase against Rajasthan Royals in Match 18 of IPL 2015.

Shaun Marsh brought up 2000 runs in IPL for him in the game for Kings XI Punjab (KXIP) against Rajasthan Royals (RR) in Match 18 of the Indian Premier League (IPL) 2015. Glenn Maxwell was out trying to hoick one over mid-wicket but found the Steven Smith at mid-wicket. KXIP are 61 for three at the end of nine overs. David Miller comes out to join Marsh.

Both Vijay and Marsh got going with a couple of well timed boundaries and looked to get a stand going for them. Vijay’s free flowing drive over Binny’s head was a treat to watch. Vijay got a chance when Karun Nair dropped a sitter as Vijay looked to sweep Pravin Tambe out of the park. Vijay though was dismissed in bizarre manner when Marsh hit one back to Rahul Tewatia, who caught the ball and hit the stumps at the non-striker’s end to catch Vijay short of the crease.

Vijay and Sehwag came out to bat and were very circumspect as both Chris Morris and Stuart Binny started well. The wicket came when Vijay pushed one towards mid off and set off. There was some confusion and Steven Smith spotted that. He scored a direct hit at the striker’s end to catch Sehwag short of the crease. Live Scorecard: Rajasthan Royals (RR) vs Kings XI Punjab (KXIP) IPL 2015 Match 18

Earlier, Rajasthan posted a par total on board thanks to the stand between Ajinyka Rahane and Shane Watson. Watson was brutal in his 45, but Rahane kept timing his shots and scored a brilliant 74. The middle-order did not go big but they chipped in with cameos for Rajasthan to finish with 191/7 at the end of 20 overs. Ajinkya Rahane’s majestic knock takes Rajasthan Royals to 191/6 against Kings XI Punjab in Match 18 of IPL 2015 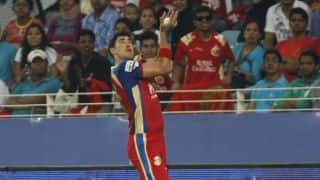