March was ruled out of the Test series against South Africa due to a calf strain.

Injured Australian batsman Shaun Marsh has said that he has not given up on regaining his place in the Test side despite an agonising week battling a calf strain that ended his South Africa tour before it began.

Although Marsh was frustrated at missing out on a possible Test berth only days after being selected, he is determined to finish Western Australia‘s (WA) Sheffield Shield campaign in fine style to keep his name at the forefront of selectors” minds.

According to News.com.au, Marsh said he had no problems with Australia’s selection panel calling up Phillip Hughes to replace him in the squad, despite the first Test not being for another 10 days, adding that he is confident he could earn another opportunity to continue his Test career, which stalled in early 2012 after seven appearances.

Marsh said his recovery was ”coming along slowly” after being restricted to mostly pool work and massage treatment over the past week. 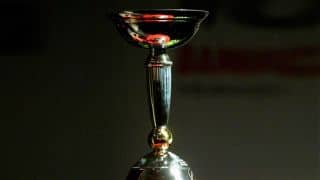