Marsh and Smith put up a brilliant unbeaten partnership of 199 runs for the fifth wicket.

Shaun Marsh cracked an unbeaten century and Steven Smith reached 91 not out as Australia ended the first day of the opening Test against South Africa at 297 for four at the SuperSports Park in Centurion on Wednesday.

Australia recovered from a precarious position of 98 for four just after lunch to post a strong total after the end of the first day, riding on a brilliant unbeaten partnership of runs for the fifth wicket between Marsh and Smith.

The two batsmen joined forces in the middle when their side was in trouble, having lost Michael Clarke for a modest total of 23. The South African pacers had not allowed the tourists to settle in and the movement of the ball was enough to trouble the batsmen.

After putting Australia to bat, South Africa reduced the tourists to 24 for two with their strike bowlers Dale Steyn and Morne Morkel providing crucial breakthroughs.

After the early blows, debutant Alex Doolan and Marsh combined to take their side safely into the second session. They put up an unbeaten –run stand for the third wicket, keeping the South African bowlers at bay.

Clarke fell just after lunch, as from then, Marsh and Smith took over the charge of rebuilding their innings and ended the day on a high with their side in command. 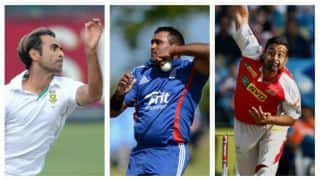