Angelo Mathews, Kusal Perera, Dushmantha Chameera and Nuwan Pradeep too are injured and their availability will be confirmed post Monday.

Ahead of Nidahas Trophy, Sri Lanka faced big blow with Shehan Madushanka and Asela Gunaratne being ruled out due to injury. Both Gunaratne and Madushanka were members of Sri Lanka’s squad to Bangladesh for T20Is. While Gunaratne could not find a spot in the playing XI, Madushanka’s double-strike helped Sri Lanka seal the second T20I and win the series. Gunaratne, who had recently recovered from an injury, picked up another during the net sessions. He suffered a shoulder injury while practicing for better fielding. Madushanka got injured while fielding, and has got a bad hamstring.

As reported by Cricbuzz, the chances of Madushanka getting himself on his feet before the Nidahas Trophy are very low. The bowler was supposed to undergo scans to evaluate the state of his injury and the results are yet to come out. Chairman of Selectors, Graeme Labrooy hinted at both players missing the tournament.

However, these two are not the only injured players in the Sri Lanka camp. Angelo Mathews, Kusal Perera, Dushmantha Chameera and Nuwan Pradeep too are injured and their availability will be confirmed post Monday.

India, Bangladesh and Sri Lanka will play the Nidahas Trophy to commemorate 70 years of Sri Lanka’s independence. All matches of the series will be played at the R Premadasa Stadium. 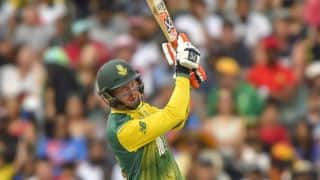