A maiden century by teenage opener Ahmed Shehzad inspired Pakistan to a 41-run win over New Zealand Thursday to wrap up the six-match one-day series with a game to spare. 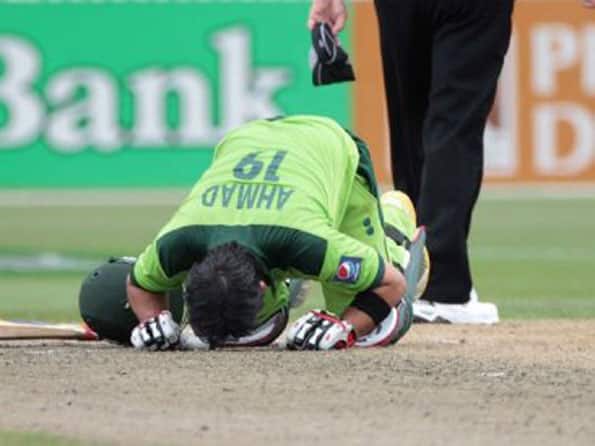 A maiden century by teenage opener Ahmed Shehzad inspired Pakistan to a 41-run win over New Zealand Thursday to wrap up the six-match one-day series with a game to spare.

The 19-year-old cracked 115 off 109 deliveries in a masterful innings in Hamilton as Pakistan posted 268-9 after being sent into bat first in the fifth ODI. New Zealand, who are on a rotten run of form, made the worst possible start to their reply, losing a wicket on the first ball when Jesse Ryder was run out and they never threatened from there.

Their innings came to a halt in the 47th over at 227 to give Pakistan an unbeatable 3-1 lead in the series with one match washed out, while New Zealand have now lost 15 of their past 16 ODIs.

It was a timely performance from Shehzad, who delivered on the promise he had hinted at in his previousseven international innings, which produced a total of 173 runs. Around him, the other Pakistan batsmen failed to get on top of a largely medium pace New Zealand attack.

Umar Akmal’s 32 before he was run out by wicketkeeper Brendon McCullum was the second highest score while Misbah-ul-Haq, the dominant performer in the series so far, struggled to 25 before he fell to an acrobatic catch by Jacob Oram at deep square leg.

After winning the toss and opting to bowl first in overcast conditions, New Zealand made the surprise move of resting their best swing exponent Tim Southee. But their reasoning appeared to be a preference for slower deliveries, which paid dividends with medium pacers Oram and Scott Styris taking two wickets apiece. Styris claimed the crucial scalp of Shehzad, who hit 12 fours and three sixes in his lengthy innings, all of them off new ball bowler Hamish Bennett.

He was striking out for another six when he was deceived by a slower ball and got under it too far, scooping a catch to James Franklin. By the time Shehzad was dismissed Pakistan were in a healthy position of 197-4 in the 38th over but they were unable to capitalise on it over the remainder of their innings. Shahid Afridi and Umar Akmal could only scrape together 39 runs in the batting power play between the 44th and 48th overs.

After Ryder was run out in a disastrous start, Martin Guptill and Ross Taylor both posted half-centuries for New Zealand, but unlike Shehzad they were unable to continue on and both threw their wickets away. Guptill had played a largely risk-free innings, bringing up his 50 with successive boundaries off Afridi in the 21st over.

But when he reached 65 he was unnecessarily drawn into a pull shot by a short-pitched delivery from Shoaib Akhtar outside the off-stump that he hoisted straight to Umar Akmal at mid-wicket. With New Zealand then 112-3 and requiring nearly seven an over, the big-hitting McCullum was moved up the order to push the scoring along.

He survived a simple caught-and-bowled chance to Mohammad Hafeez on the third ball he faced, accumulating nine runs before he launched into Afridi and skied the ball to substitute fielder Abdur Rehman at long-on. Taylor, captaining New Zealand after Daniel Vettori was ruled out with a hamstring strain, reached 69 when he mistimed an attempt to sweep Afridi out of the ground and was trapped leg before wicket. When he left the field, New Zealand were in deep trouble at 192-6 and eight overs remaining.

The last match in the series is in Auckland on Saturday.