Dhawan carves out his innings patiently to lead India's chase of 407.

Shikhar Dhawan scored his second Test ton on Day Four of the first Test against New Zealand on Sunday. This is Dhawan’s first ton since the sensational debut against Australia  where he scored 187.

Brendon McCullum would be cursing himself after he dropped Dhawan early in India’s second innings. It was a remarkable approach from Dhawan to carve his innings out under testing conditions. He opened the innings along with Murali Vijay when India were facing a mammoth task of chasing 407. Dhawan who was eager to play his strokes early on settled in but chose not to allow his aggression to get the better of him.
Even on the fourth morning, Dhawan scampered for a single to complete his fifty but didn’t touch any balls outside off-stump. He went in to lunch unbeaten on 81. Post the break he galloped towards his second Test ton. Ish Sodhi turned out to be the favourite for batsmen as they slogged, cut and drove him at will to accumulate as many runs as possible. Dhawan smashed a six to get tho his 99 and then him for a boundary to reach to his century. 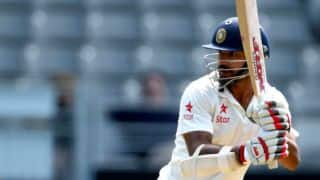 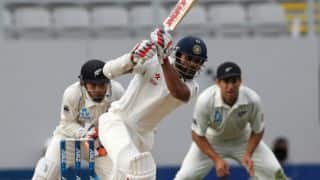