Women cricketer Shermaine Campbell was felicitated with the sportswoman of Guyana honour.

West Indies cricketers Shivnarine Chanderpaul and Shemaine Campbell have been named Guyana’s 2013 Sportsman and Sportswoman of the Year by a National Sports Commission panel.

Chanderpaul, who was nominated by the Guyana Cricket Board and the Guyana Boxing Association, received seven of the 14 panelists’ votes while powerlifter Winston Stoby got five and quarter-miler Winston George got two, reports CMC.

Campbelle defeated hockey player Alysia Xavier 10-4 in a second round of voting.

The National Awards will be presented March 28. 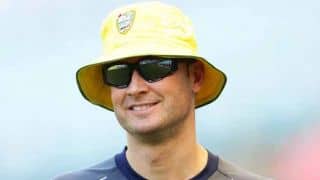