Tagenarine, 16, will open Guyana’s batting when they take on the Leeward Islands in the regional four-day competition Feb 9-12 at the Antigua Recreation Ground.

His father, currently the world’s second-ranked Test batsman, made his first class debut for Guyana at the age of 18.

The young Chanderpaul, described as being difficult to dislodge and capable of spending a lot of time at the wicket, is the lone new face in a 13-man Guyana squad announced for the four-day competition.

He joined a squad skippered by West Indies ‘A’ team and national CT20 captain Veerasammy Permaul who will also lead Guyana in the Super50 limited overs tournament.

Guyana will be without the services of Ramnaresh Sarwan and Narsingh Deonarine who will be away on West Indies duties in Australia.

Chanderpaul will also be absent having been given a No Objection Certificate to participate in the Bangladesh Premier League (BPL). 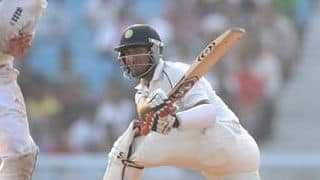 Cheteshwar Pujara: The best man to carry the mantle of India's No 3