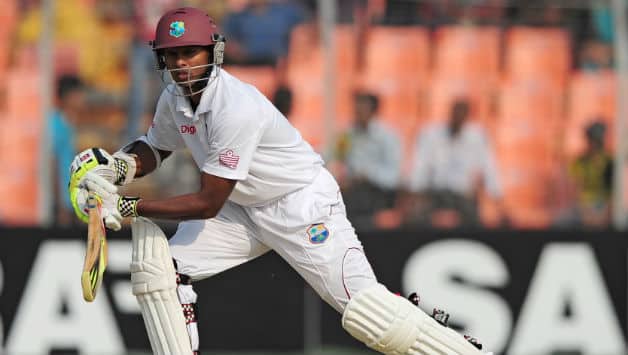 Shivnarine Chanderpaul has scored over 10,500 runs in 146 Test matches © AFP

Chanderpaul has scored over 10,500 runs in 146 Tests at an average of 51.67 and has previously played for Durham, Lancashire and Warwickshire in the English County Championship.

As part of the deal, Derbyshire will have first option to keep the 38-year-old for a third season.

“I’m excited to be joining an ambitious club with a talented young side,” Chanderpaul told the Derbyshire website.

“I was impressed with (head coach) Karl Krikken’s vision for the team and am looking forward to linking up with them at the start of the season.”

Derbyshire were promoted to Division One last season and Krikken said: “Shivnarine’s statistics in all forms of the game speak for themselves and he has been one of the stand-out players on the world stage for a long time.

“He knows what it takes to be successful and, as well as his outstanding ability with the bat, there is no doubt Shivnarine will have a hugely positive effect on our talented young squad as we embark on the challenge of Division One cricket.”

No shortage of talent in India, says Sharad Pawar