Akhtar asked Amir to grow up and not rely on 'Papa' Mickey Arthur to safeguard him.

After announcing his retirement in December 2020, Mohammad Amir has been making headlines after he expressed his desire to play the cash-rich Indian Premier League. The 29-year old pacer revealed that he would try to get British citizenship and then look to make the cut for an IPL team. While his decision received a mixed response, former Pakistan cricketer Shoaib Akhtar is the latest to react to Amir’s situation.

Akhtar asked Amir to grow up and not rely on ‘Papa’ Mickey Arthur to safeguard him.

Akhtar also cited the example of Mohammad Hafeez and asked Amir to take a cue from it. Akhtar recalled how Hafeez came up with good scores when the going was tough for him.

“The management was also against Hafeez. What did Hafeez do that was different? He just made runs and nothing else. He didn’t give the management an envelope full of cash. Amir should have learned from Hafeez,” Akhtar opined. 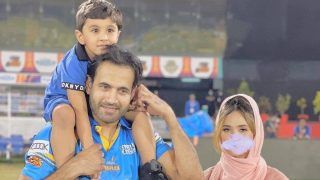 Irfan Pathan Responds to Hate Tweet Over His Wife Safa Baig's Blurred Photo That Has Gone Viral, Says ''I am Her Mate, Not Her Master''