Currently Pakistan are 98 for the loss of four wickets in 15 overs with Umar Akmal on 22.

Pakistan batsmen, Shoaib Malik was dismissed for mere 15 by Graeme Cremer after being caught by Sikandar Raza at long on, while Sohaib Maqsood was dismissed by Prosper Utseya after being caught by Elton Chigumbura at long on, against minnows Zimbabwe in the second and final T20I match at the Harare Sports Club on Tuesday. Currently Pakistan are 98 for the loss of four wickets in 15 overs with Umar Akmal on 22 and Mohammad Rizwan on 10, while Chamu Chibhabha, Luke Jongwe, Tinashe Panyangara, Sean Williams, Graeme Creamer and Prosper Utseya are the bowlers that have been used so far by Zimbabwe skipper, Elton Chigumbura. Zimbabwe are looking to fight it out in this game in order to draw level in the series. LIVE SCORECARD: Zimbabwe vs Pakistan 2015, 2nd T20I at Harare

Earlier, Pakistan skipper, Shahid Afridi won the toss and elected to bat first on a typical African wicket that looked completely like a batting track and promised runs. Pakistan made a couple of changes in the squad form the 1st T20I as they bring in Mohammad Hafeez and Mohammad Irfan for Mukhtar Ahmed and Wahab Riaz, who are the surprise drops from the squad, while Zimbabwe surprisingly field an unchaged squad from the previous game. Zimbabwe, who lost a thriller in the last game by just 13-runs are sure to fight it out in this game to finish the series on level terms, Pakistan would look to seal the series here with a 2-0 clean sweep. LIVE UPDATES: Zimbabwe vs Pakistan 2015, 1st T20I at Harare 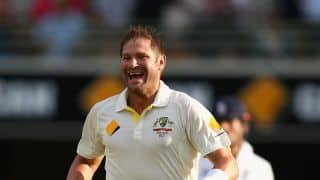 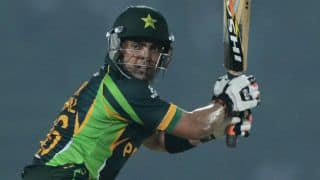