A video recently surfaced on social media where the players of a local Kashmiri cricket club were seen sporting Pakistani cricket team's jersey and singing their national anthem before the start of a match.

India and Pakistan have had a tensed history between them, with Kashmir, an Indian state, being the bone of contention. The dispute over the state continues since independence of the two countries, with Pakistan occupying some part of Kashmir, known as POK in India and Azad Kashmir in Pakistan. The troubled relations have had their implications on the cricketing ties between the two countries, as they hardly play any cricket apart from the occasional meetings in the ICC tournaments. There have been instances of a Virat Kohli fan getting jailed in Pakistan and a Shahid Afridi fan being detained in Assam. However, in a latest shocking incident, a Kashmiri cricket team played local match wearing Pakistan jersey.

A video recently surfaced on social media where the players of a local Kashmiri cricket club were seen sporting Pakistani cricket team’s jersey and singing their national anthem before the start of the match at the Wayil playfield in central Kashmir s Ganderbal district. The players also chose to start the match with the Pakistan national anthem.

The players of Baba Darya Ud Din team, named after the popular saint whose shrine is situated in Ganderbal, wore Pakistan s traditional green colours while the opposition were in white. The Pakistan national anthem was played as a mark of respect before the start of match, as announced by the public address system. A report in Indian Express quoted a member of the team, as saying: We wanted our team to look different and also wanted to show fellow Kashmiris that we haven t forgotten Kashmir issue, so we found this particular theme as most appropriate and catchy.

The report further claimed that there were some members in the team who were apprehensive about the actions, as getting involved in it meant defiance of the law of land. It quoted another member of the team as saying: Why should we be scared when Kashmir is a disputed territory and Allah is with us? 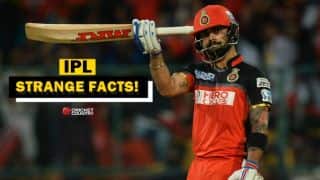