Carlos Brathwaite rued West Indies' batting collapse and mentioned that their total was far from what they wanted to put on the board.

Carlos Brathwaite rued West Indies‘ batting collapse and mentioned that their total was far from what they wanted to put on the board. West Indies were put into bat after India captain Rohit Sharma opted to bat and were kept to 109 for 8 in 20 overs, a total that India, despite stuttering, eventually chased down to win the match by five wickets and take a 1-0 lead in the series.

Kuldeep Yadav produced stunning figures of 3 for 13 in four overs as West Indies registered their lowest T20 total against India. Debutants Krunal Pandya and Khaleel Ahmed, along with Kuldeep threatened to bowl West Indies out in double figures, before Fabian Allen and Keemo Paul took them over the 100-run mark.

“I don’t think we applied ourselves. We were either too defensive or too attacking,” Brathwaite said during the post-match presentation ceremony. “We could’ve scored 130-140, which would’ve been a winning total, had we kept some wickets for the back end. As young bunch of guys, we want to be fearless. We have our chance to do something for West Indies, we have a task to get to the standards where we should be.”

Despite a low score, all was not lost for West Indies. Debutant Oshane Thomas rocked India’s top order by leaving India at 16 for 2. He had Rohit out caught behind after the ball took the inside edge of his bat and cleaned up Shikhar Dhawan for the third time in three matches. He continuously bowled around the 145 km/h-mark and troubled the batsmen with the bounce he was able to generate.

Brathwaite himself bowled a wonderful first spell of 2 for 4 to further peg India back at 45 for 4 before Dinesh Karthik’s experienced hands took over. The skipper said that although he is unaware about what lies next for Thomas, the pacer has promise that can take him a long way forward. “I don’t know his long-term plans, had a few chats with him and he’s in the best place he could be,” added Brathwaite.

“He understands the opportunities he has, he has to continue to get fitter and stronger. The world is at his feet, it’s for West Indies to help him become another Joel Garner or Michael Holding.” 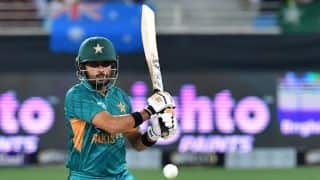