Billings was forced off the field in the second over of Kent's Royal One-Day Cup match after he hurt himself diving to stop the ball.

Back from his Indian Premier League (IPL 2019) duty with the Chennai Super Kings where he played just one match, England batsman Sam Billings sustained a shoulder injury while fielding for Kent in the Royal One-Day Cup clash against Glamorgan on Thursday.

According to a report in Sky Sports, Billings, who has been named in England s ODI team to face Ireland in the one-off ODI on May 3, but not in England s ICC World Cup 2019 preliminary squad, was forced off the field in the second over of the match after the 27-year-old hurt himself diving to stop the ball at mid-off in Cardiff. (ALSO READ: Jofra Archer, Chris Jordan called up by England but not in World Cup squad)

Billings Kent team-mate Joe Denly, in the World Cup squad, suffered a back problem on Tuesday, while Jason Roy and Tom Curran have both been ruled out of Surrey’s clash with Middlesex on Thursday due to injury. 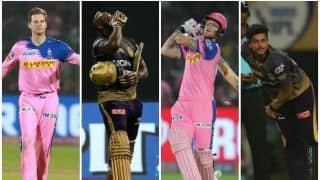