Shreyas Iyer was caught by opposition skipper David Warner off the bowling of Praveen Kumar.

Delhi Daredevils (DD) lost their second wicket with 93 runs on board when Shreyas Iyer was caught by David Warner off the bowling of Praveen Kumar during their Indian Premier League (IPL) 2015 match against the Sunrisers Hyderabad (SRH) at Visakhapatnam on Saturday. Iyer was dismissed after an eventful 40-ball 60, that consisted of three fours and five sixes and helped DD get off to a quick start. The dismissal brought Yuvraj Singh to the crease along with skipper JP Duminy. Live Scorecard: Sunrisers Hyderabad (SRH) vs Delhi Daredevils (DD) IPL 2015 Match 13

Delhi Daredevils earlier won the toss, and skipper JP Duminy elected to bat, announcing the same playing eleven as the one during their last game against Kings XI Punjab (KXIP), in which they registered their first win of the eighth edition of the IPL at Pune. SRH skipper David Warner, on the other hand, made the big announcement, which was that of the availability of Dale Steyn for the first time in the ongoing tournament. Live Updates: Sunrisers Hyderabad (SRH) vs Delhi Daredevils (DD) IPL 2015 Match 13 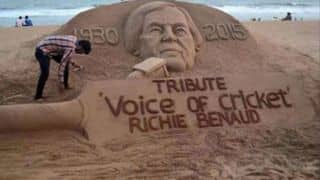 Richie Benaud: Sand sculpture made by Indian artist in Puri