Delhi Daredevils are being anchored by Iyer and Duminy.

Shreyas Iyer and JP Duminy have completed their fifty in the Indian Premier League (IPL) 2015 match between Delhi Daredevils (DD) and the Mumbai Indians (MI). Iyer opened the batting with Mayank Agarwal and has anchored the DD innings in the company of JP Duminy. It has been a good innings from him and another proof of his precocious talent and ability going ahead in the future. Live Blog: Delhi Daredevils vs Mumbai Indians, IPL 2015

Iyer plays shots through the line and is quite aggressive in his approach. He also walks across his stumps and can loft the ball with ease. He completed his fifty in the 11th over of the game bowled by Jasprit Bumrah. Iyer hit a six and then hit a four as he made his way to yet another fifty. It is helping him build his reputation in this tournament as one of the youngsters to watch out for. Live Scorecard: Delhi Daredevils vs Mumbai Indians, IPL 2015

Duminy is in magnificent touch and moved towards his fifty when he hit Kieron Pollard for a couple of sixes in the 12th over. Duminy has picked up pace after he went into a shell in the earlier overs. But, with his ability, he can smash it around and then get on to score well to help his team put a good total on the board.

DD were put in to bat by MI after Rohit Sharma won the toss and elected to bowl with an unchanged side at his disposal. On the other hand, DD had one change as they brought in another spinner in Shahbaz Nadeem and benched Manoj Tiwary. 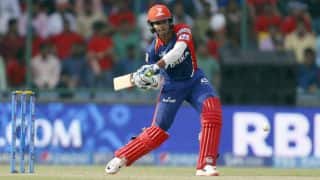 Delhi Daredevils slow and steady against Mumbai Indians in IPL 2015