Shreyas Iyer prepares to lead Board President's XI against visitors New Zealand in a one-day warm-up tie in Mumbai on Tuesday.

It has been more than six months since Shreyas Iyer was included in the squad for the fourth Test against Australia in February. However, he has taken it in his stride as he gears up for a fresh challenge as he prepares to lead Board President s XI against New Zealand in a one-day warm-up tie at Brabourne Stadium, Mumbai on Tuesday. Although being deprived of a Test cap against Australia, Iyer mentioned that it will not stop him from performing even better as the aims to put up a strong show. He intends to play his game as well as perform and not think about the selectors. KL Rahul, Karn Sharma added to Board President s XI squad vs New Zealand

As I told you before, my job is to keep performing. I won t be thinking what the selectors are thinking. When you have runs backing you up, you can go in with full confidence. When you get a good start again in a new game, you want to ensure that you convert them into big scores. But whatever runs I have scored is past now. Tomorrow is a new day and I am looking forward to it, said Iyer in a press conference, as reported by PTI. Mitchell Santner: Tough to bowl spin against India

Despite his decent performance in the domestic circuit, he is yet to be picked up for the Indian side. On being asked if he was frustrated about it, he said: No, I am tired of this question, to be honest. I wouldn t like to reply at all. I think I have given all my answers previously. Again and again, I don t want to talk over it. My motivation is enjoying cricket, and that s what I do. I love playing cricket. It s my passion. I love to score in every match, and that s what my aim is every time I go to the ground. Speaking on Tuesday s warm-up game against New Zealand, he added, We youngsters treat this game as an opportunity for us. We will try to give our best. 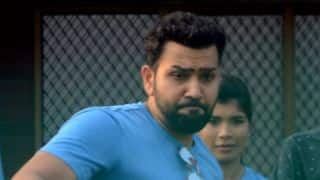