Shrikant Wagh achieved this for Stokesley Cricket Club against Middlesbrough.

Left-arm medium pacer Shrikant Wagh, who starred in English league cricket by taking all 10 wickets, says his rare feat has provided a much needed fillip to his career. Wagh’s stellar performance came for Stokesley Cricket Club in the match against Middlesbrough in North Yorkshire & South Durham (NYSD) Cricket League. A fit-again Wagh returned with figures of 11.4-1-39-10. Asked about his feat, Wagh told PTI: “I did not expect to take a 10-wicket haul. I am going well after the surgery lay off last year. I am very fit and keen as ever. I am expecting more good performances.”

Incredible scenes at the SCG as Shrikant takes all 10 Middlesbrough wickets to record a 25 point win! pic.twitter.com/yvQaTtS4Ap

Wagh underwent a left knee surgery after getting injured during warm-up before a Ranji Trophy game last year, keeping him out of action for eight months. Wagh, who has picked up 33 wickets so far in the league, is optimistic that the feat will help him bounce back stronger: “100 [per cent] as any good performance helps a sportsman. This will help me come back stronger.”

Wagh has so far played 63 First-Class matches, picking up 161 wickets at 31. He played his last First-Class match for Vidarbha against Chhattisgarh at Nagpur in October last year. He has also played in the IPL and was part of the Rajasthan Royals and the Pune Warriors India. 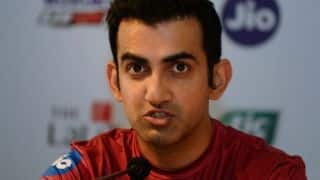