Sikandar Raza and Tinashe Panyangara added 89 runs for the ninth wicket, which guided Zimbabwe to 235/9.

Playing for Zimbabwe against New Zealand in the second One-Day International (ODI) at Harare Sports Club, Sikandar Raza and Tinashe Panyangara added 89 for the 9th wicket at a breakneck pace, requiring a mere 79 balls. Zimbabwe were reeling at 68 for 5 when Raza walked out to join Sean Williams. The pair added 60, but three more quick wickets saw the Zimbabweans at 146 for 8 when Panyangara walked out to join Raza. Raza brought up his hundred off the sixth ball of the 50th over (a no-ball) off a mere 95 balls with five fours and four sixes. Panyangara was run out off the final ball (the free-hit) for a 39-ball 33. The pair guided their side to a fighting total of 235 for 9 at the end of 50 overs, which keeps them in contention for a victory. LIVE SCORECARD: Zimbabwe vs New Zealand 2015, 2nd ODI at Harare

In the process Raza and Panyangara set a new 9th-wicket ODI record for Zimbabwe, beating the 55-run stand between Kevin Curran and Peter Rawson against West Indies way back in World Cup 1983 at Edgbaston. There have been three stands between 53 and 54, but the 55 has remained intact over time. LIVE UPDATES: Zimbabwe vs New Zealand, 2nd ODI at Harare

This is also the second-highest 9th-wicket stand against New Zealand in ODIs. The only one higher than this also came on Zimbabwean soil: coming together at 44 for 8, Irfan Pathan and JP Yadav added 118 at Bulawayo in 2005. Sports Minister urges BCCI to be more accountable and transparent 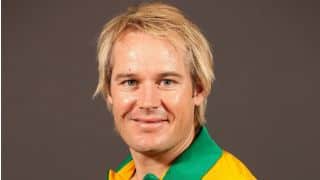