Lendl Simmons hit an impressive maiden century to help the West Indies post a challenging 298-4 against Bangladesh in the first one-day international on Thursday. 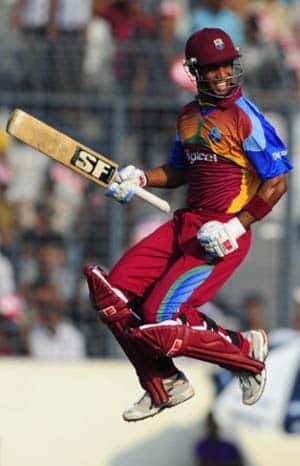 Lendl Simmons hit an impressive maiden century to help the West Indies post a challenging 298-4 against Bangladesh in the first one-day international on Thursday.

The opener, 26, cracked two sixes and eight fours in his 124-ball 122 to prop up the innings after the tourists had been put in bat in the day-night match in Dhaka.

Simmons, who had scored six half-centuries in his last nine one-dayers before this match, completed his hundred in the 37th over with a single to mid-wicket off left-arm spinner Shakib Al Hasan.

His best came in the 40th over when he hit paceman Shafiul Islam for four boundaries before being caught by Alok Kapali off paceman Rubel Hossian in the 42nd over.

Samuels also fell in the same over after hitting two sixes and six fours in his 78-ball knock, but not before setting the stage for the closing-overs onslaught with Simmons.

The West Indies plundered 74 runs in the last eight overs, with Kieron Pollard smashing three sixes in his 25-ball 41 and Darren Bravo scoring 20 off 19 balls.

Barath left the field due to a hamstring injury as runners are not allowed under new rules, but there was no respite for Bangladesh as Samuels looked in good form from the beginning.

Samuels, who hit a half-century in the one-off Twenty20 international on Tuesday, lofted left-arm spinner Abdur Razzak over mid-wicket for the first six of the match.

Bangladesh captain Mushfiqur Rahim, leading in his first one-day series, used seven bowlers, but none could keep pressure on Simmons and Samuels who continued to gather runs comfortably against both pace and spin.

Wicket-keeper Denesh Ramdin led the West Indies in place of all-rounder Darren Sammy who was ruled out of the match due to an upset stomach.(AFP)