KKR recently announced Jacques Kallis as their head coach for the upcoming season.

Kolkata: Former champions Kolkata Knight Riders today named Simon Katich as their new assistant coach for the upcoming Indian Premier League (IPL) ninth season. The former Australian opener will be assisting Jacques Kallis who was recently announced as the head coach. Welcoming Katich on board, Kallis said: “It is great to have Simon on my management team. I have played many games against him and his understanding of the game is very good. He is a great asset to have and I really look forward to formulating plans with him and the rest of the team to help KKR to another title in 2016.” READ: BCCI expects plenty of bids for two new IPL teams to replace CSK, RR

The 56-Test veteran used to open the innings for Australia and Perth Scorchers and was also a handy chinaman bowler. Katich also led his Big Bash League side Perth Scorchers to the title in 2014 before hanging up his boots.

The 40-year-old now works with Australian Football League’s club Western Sydney Giants as Operations manager. Making the announcement CEO & MD of KKR Venky Mysore said: “Katich is a great addition to ‘Team KKR’. I am sure his T20 experience as well as his well organised coaching skills will come in handy for the KKR players.” 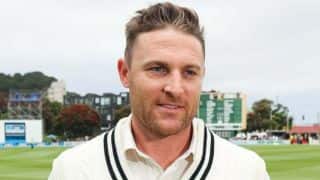 The “World Bosses” Night Out: Usain Bolt, Chris Gayle on the house!