Clarke recently wrote in his autobiography, denying he played any part in Katich losing his Cricket Australia contract in 2011.

Melbourne: Former Australian batsman Simon Katich has rejected Michael Clarke‘s claims that the pair have buried their differences, saying their relationship is “non-existent”. Clarke has said the disagreeing duo patched things up following an infamous 2009 run-in in the Sydney Cricket Ground (SCG) dressing room, reports cricket.com.au. Clarke recently wrote in his autobiography, denying he played any part in Katich losing his Cricket Australia contract in 2011. Katich famously grabbed Clarke by the collar in the SCG dressing room, over a disagreement over when the team song would be sung, with Clarke desperate to leave for a prearranged function at a Sydney bar with several team-mates. FULL CRICKET SCORECARD: Australia vs South Africa, 1st Test at Perth

Clarke said in his autobiography he called Katich a “weak c***” leading to the opener grabbing him, but insisted they have let bygones be bygones. Katich responded to it by saying Clarke is “obviously trying to sell a book”. “I think that’s a bit of a stretch to say that we’re mates,” Katich said on Australian Broadcasting Corporation’s (ABC) Grandstand on Sunday. “It’s [our relationship has] been non-existent, so to suggest that we’re mates now after everything that has happened is a bit [of] a stretch of the imagination.”

He also criticised Clarke for referring to former all-rounder Shane Watson as part of the team’s “tumour”, terming it a “rather ironic” claim. “I haven’t changed my point of view on the matter. I said what I said a few years ago. I guess at the moment he’s obviously trying to sell a book so it’s amazing how more and more of the story comes out,” Katich said to ABC. “We’ve hardly spoken about it, since it all happened.” 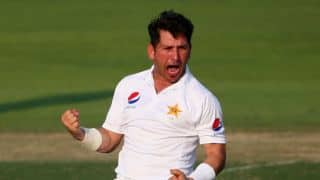