The cricket bat used by Australian sporting legend Don Bradman to launch his Test career has been put up for auction and is expected to fetch up to Australian dollars 145,000.

Bradman, who retired with a yet-to-be-topped Test batting average of 99.94, used the bat to open his Test career in the 1928 series against England.

The current vendor, an Australian collector, put it on display at the National Sports Museum at the Melbourne Cricket Ground but has now decided to sell.

“The market is tougher now but we expect to reach around the same price again,” Max Williamson of Mossgreen Auctions in Melbourne told AFP.

“Cricket has got a very big community of collectors so we expect it to be sold to a collector or an institution.”

The bat, signed by Bradman as DGB, also holds the signatures of 19 members of English and Australian teams who played in his maiden Test.

Bradman scored just 18 and 1 in his first Test but went on to become a player widely acknowledged as the greatest batsman of all time.

The market for memorabilia related to Bradman, who died in 2001 aged 92, remains strong with a bat he used and signed by his 1948 “Invincible” team selling for Aus 61,000 last year.

The baggy green cap he wore at his final Test sold for more than Australian 400,000 dollars in 2008. 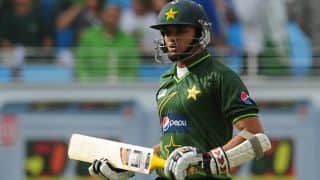