Harmanpreet, who usually bats at No.4 feels flexibility is the key in T20s.

India women captain Harmanpreet Kaur is willing to be shuffled around in the batting order as the team tries to sort out its combination for the Women s World T20 starting November 9. The 29-year-old skipper, who usually bats at No.4 feels flexibility is the key in T20s and asserted that every player is open to the idea of being moved up or down in the line-up. In the five match T20I series against Sri Lanka, she had batted at No. 4, 5, 6 and even at 7 against Australia A

“It’s a 20-over game so you have to be flexible all the time,” Harmanpreet said before the team s departure to the West Indies. “I was being shuffled because I usually bat at No. 3 or 4. But in this team, everyone was given chances to bat at various slots so that when we leave for World Cup, we get a better idea which player is suited to bat where. So this pattern, goes for everyone, even the bowlers.”

India A women recently wrapped up a 3-0 series win against Australia A, part of the practice matches ahead of the World T20, and Harmanpreet feels there were quite a few takeaways from the series and the preparatory camos arranged by the BCCI.

“Their (Australia) international team is obviously more competitive and they have a quality side. But I think it helped us to play against Australia A because they have a good set of players there as well,” Harmanpreet said.

“We were planning to go to West Indies a little earlier but it didn’t happen. But good for us, we received some quality practice and we had a good time. We were trying a lot of things; we wanted to give chances to everyone. I believe whatever we had planned, we were able to execute them.

“We just wanted to have a good time on the ground and get good practice games. BCCI was able to arrange it all for us and we are thankful to the board to get it all done despite all that was happening. The camp helped us try out every player and we are now much better sorted regarding our team composition.”

India women finished quarterfinalists in the previous World T20 held in India and Harmanpreet reckons the side has improved vastly in the last two years. The results support the statement. Last year India reached the final of the Women s World Cup, where they lost to England by 21 runs. Earlier this year, they beat Sri Lanka 4-0 in the five-match series with the skipper herself scoring 63 and 24 in two innings. Plenty will be expected of Harmanpreet, who is coming off a fruitful series against Australia A, registering scores of 41, 57, 45 and 63.

“We have improved a lot as a team. Among the openers, Smriti has established herself as one of the best batswomen,” she said. “The youngsters are also coming up and contributing so I think all these elements combined gives a good balance to our team. We cannot be compared with anyone else because different teams have different approaches. To succeed in the World Cup, we need to concentrate on what we have.

“Everyone knows their role in the team and what we are expecting from them. So if the players are aware of what the expectations are from them, that motivates them even further. They know their strength and capabilities and that is what drives them forward. As a team when you know that all your players know their role, it’s a big advantage to have.”

India open their campaign against New Zealand on November 9 in the series opener, followed by the much-anticipated clash against Pakistan two days later. The other two teams India are grouped with are Ireland and Australia, and India will not have it easy in the Group stage. Harmanpreet however, believes that India have studies their opponents and have their plans against each team sorted.

“We have played almost all these teams. They’ve all improved vastly in the last couple of years. We intent of taking things match by match and according to our game plan. Provided we can do that, it gives us a chance to win all our group matches,” Harmanpreet said. 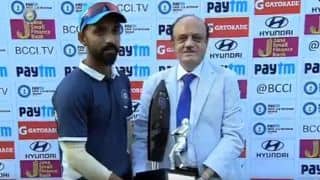