England ODI captain Eoin Morgan said “the sky’s the limit” for his record-breaking side, with a total of 500 firmly in their sights after their rout of Australia. Morgan’s men posted a new all-time ODI record of 481 for 6 at Trent Bridge en route a 242-run thrashing of their arch-rivals to go an unbeatable 3-0 up in the five-match series. Man-of-the-match Alex Hales top-scored with 147 on his Nottinghamshire home ground, just as he had done when making 171 in England’s 444 for 3 — the previous ODI record total — against Pakistan at Trent Bridge two years ago.

Opening batsman Jonny Bairstow made 139 on Tuesday, his fourth hundred in 6 ODIs that included a century in a shock loss to Scotland just before this series. Meanwhile Morgan, who missed the second ODI in Cardiff on Sunday with a back spasm, smashed England’s fastest fifty at this level, off just 21 balls.

“I think [we’re] definitely very close [to 500]. In the position we found ourselves today, with 6 overs to go, we’d have never imagined — certainly after that game against Pakistan — that we’d come close, pass, maybe stare down the barrel of scoring 500. The sky’s the limit with these guys,” Morgan added after England, the 2019 World Cup hosts, cemented their place at the top of the ODI rankings in style.

England might well have broken the 500-barrier had they not lost both Hales and Morgan, who put on 124 for the fourth wicket, off successive balls in the 48th over.

Michael Atherton, commentating for Sky, labelled the match a “perfect storm” in that a talented England batting line-up were able to make the most of a good pitch on a ground with relatively short boundaries, while facing an inexperienced attack. World champions Australia were without their injured Ashes-winning fast-bowling trio of Mitchell Starc, Pat Cummins and Josh Hazlewood.

Their hopes of chasing down a daunting target were not helped by the absence of two of the world’s best batsmen in Steven Smith and David Warner after they were both given year-long bans by Cricket Australia for their roles in a ball-tampering scandal in Cape Town. Even with Smith and Warner, Australia might have struggled to avoid what became their heaviest defeat at this level, in terms of runs, and England’s largest win. England spinners Adil Rashid and Moeen Ali shared 7 wickets between them as Australia were dismissed for 239 with 13 overs to spare.

“What was most pleasing was the level of intensity we operated at, and continued to operate at throughout the whole game,” said Morgan, who hopes to lead England to a maiden World Cup title next year.

For Australia captain Tim Paine, the hurt was even worse than the blow to the face he suffered while keeping wicket in Cardiff: “It’s tough. I thought I had some headaches in Cardiff after 25 overs when I hit my head, but I had a few more out there today to be honest. I’ve been playing cricket since I was a kid and that is the hardest day’s cricket I have ever had in my life.

“Everything we tried didn’t work, everything they tried came off. Normally that happens for an hour or two then you get a couple of wickets. But for it to happen as long as it did, you have to take your hat off. They struck the ball as well as I have ever seen.” 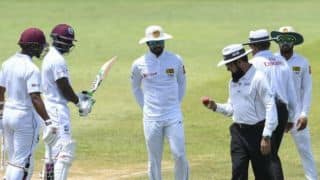 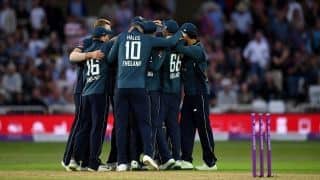